Francisco’s lesions started after returning home to Mexico City from California in late June: First, two spots on his buttocks. Then, a week later, lesions all over his body, his mouth so full of sores that he could barely talk or drink water.

“The pain was indescribable, catastrophic,” said Francisco, 44, who asked Reuters to conceal his real name.

Francisco had one of at least 59 monkeypox infections confirmed in Mexico since May, which experts believe could undercount the true number.

Protestors hold up signs reading “Release the vaccines” and “I am Moni, I demand my vaccine” outside the Health Secretary building, in Mexico City, Mexico, Mexico, on July 26, 2022. (REUTERS/Edgard Garrido)

In Latin America, Mexico ranks behind Brazil and Peru for confirmed cases of the viral disease, which has primarily spread among gay and bisexual men like Francisco.

The World Health Organization declared monkeypox a global health emergency on July 23, prompting greater attention from regional officials. However, some doctors and activists in Latin America’s two largest countries told Reuters the response has been too tepid.

“We are not seeing the necessary measures taken, nor the necessary importance given to monkeypox,” said Dr. Sergio Montalvo, a sexual health specialist in Mexico City.

MONKEYPOX: WHAT YOU MUST KNOW ABOUT THE VIRUS — AND HOW TO PROTECT YOURSELF

Doctors like Montalvo fear authorities have not learned lessons from the COVID-19 pandemic, which has strained health systems and left governments strapped for cash.

The story is similar in Brazil, where over 970 infections represent over two-thirds of the region’s total, per data from the Pan American Health Organization (PAHO).

Brazil’s Health Ministry announced a contingency plan on July 28, over a month after its first case and a day before reporting the first monkeypox death outside Africa in the current outbreak.

“We were already receiving news about the outbreak in Europe and the United States, but the government didn’t do anything,” said Vinicius Borges, a infectious disease specialist in Sao Paulo. He said pain from monkeypox lesions has had “serious effects” on his patients.

Neither Mexico nor Brazil’s health ministries responded to multiple requests for an interview.

Following the WHO declaration, Mexico’s Health Ministry launched a website about monkeypox and its second advisory with information about the virus – its first since the country confirmed a case in May. 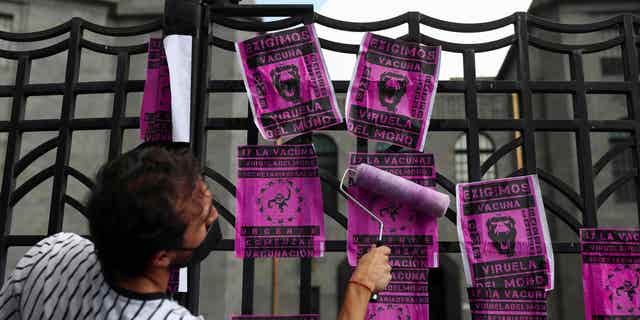 An activist putting up posters at a protest of Mexico’s handling of the monkeypox virus, outside the Health Secretary building, in Mexico City, Mexico, Mexico, July 26, 2022. (REUTERS/Edgard Garrido)

“In these two months, we could have already made significant progress,” said Ricardo Baruch, an LGBT health researcher who helped organize a protest in Mexico City last week to ask for greater efforts to target prevention to men who have sex with men (MSM).

A study in the New England Journal of Medicine found that 98% of infections in the ongoing outbreak outside Africa are among gay and bisexual men.

Mexican health authorities have avoided emphasizing the risks to this group.

“They don’t want to create stigma, but if they don’t talk about it, the policies aren’t going to be focused on us,” said Baruch.

“There hasn’t been an effort from the federal government to raise awareness in the population as to how you can get monkeypox, how it transmits from person to person, how you recognize the lesions in the skin and how it can transmit by close or sexual contact,” Pasternak said.

But “it will take some time to build testing capacity in Brazil,” said Pasternak, a member of Sao Paulo state’s monkeypox advisory board. “We don’t really see the intention of the health ministry to do this planning.”

In one possible sign of progress, PAHO said July 27 that ten countries in the region had expressed interest in acquiring a vaccine.

Dr. Andrea Vicari, PAHO’s director of infectious threat management said it was not too late to curb monkeypox’s spread in the Americas.

“Even if we don’t have vaccines, we have other control measures. If we implement these well, we will be able to accomplish our objectives to reduce transmission.”