US Open 2022: YouTube star removed from grounds after haircut prank

Two fans watching Nick Kyrgios and Karen Khachanov in the quarterfinals of the U.S. Open on Tuesday night were booted from Arthur Ashe Stadium for an unusual spectacle in the stands.

One fan was seen giving the other a haircut while the match was going on. U.S. Tennis Association spokesman Brendan McIntyre said the two fans were kicked off the grounds for disrupting play.

A fan gets his haircut during their Men’s Singles Quarterfinal match between Nick Kyrgios, of Australia, and Karen Khachanov on Day Nine of the 2022 U.S. Open at USTA Billie Jean King National Tennis Center on September 06, 2022, in the Flushing neighborhood of the Queens borough of New York City. (Elsa/Getty Images)

“When someone saw it, security went to the two individuals. They were escorted out of their seats and then off the grounds for disruption of play,” McIntyre said. “There’s a first time for anything.”

The man receiving the haircut was later identified as YouTube prankster JiDion. His entire head was shaved before security officials reached him. He waved to the crowd before he left the stadium.

This was not the first time JiDion had been seen at a sporting event over the course of the year. He made his mark during an NBA game in March when he was seen getting his hair cut in a game between the Timberwolves and Dallas Mavericks in Minnesota. 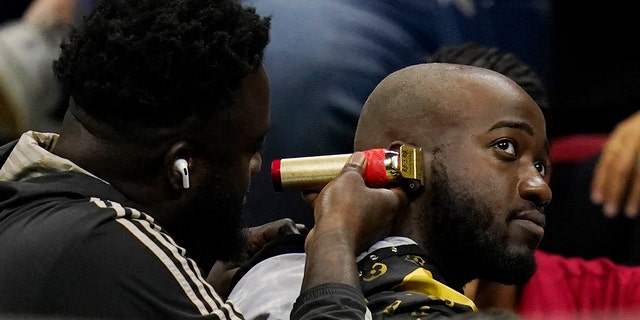 A fan gets a haircut as Nick Kyrgios, of Australia, plays Karen Khachanov, of Russia, during the quarterfinals of the U.S. Open tennis championships, Tuesday, Sept. 6, 2022, in New York. (AP Photo/Charles Krupa)

According to the New York Post, JiDion was also removed from Wimbledon in July for using an airhorn during a match between Novak Djokovic and Jannik Sinner. 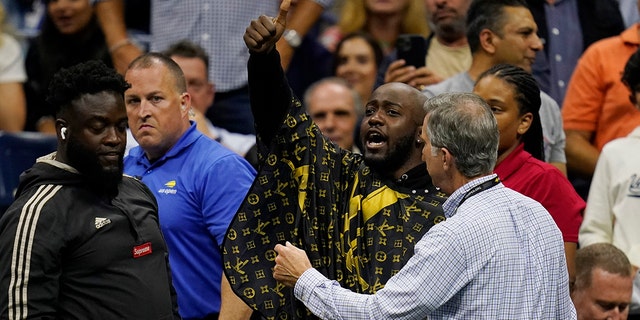 A fan, at center, gets removed from his seat after attempting to get a haircut during the quarterfinals of the U.S. Open tennis championships between Nick Kyrgios, of Australia, and Karen Khachanov, of Russia, Tuesday, Sept. 6, 2022, in New York.  (AP Photo/Charles Krupa)

Ryan Gaydos is the sports editor for Fox News and Fox Business. Story tips can be sent to Ryan.Gaydos@fox.com.