Washington Commanders rookie running back Brian Robinson Jr. has been designated to return this Sunday from the non-football injury list after he was shot multiple times during an attempted carjacking.

Robinson Jr. will be back on the Commanders’ active roster only six weeks after he suffered non-life-threathening injuries in the Aug. 28 shooting. One of the bullets struck his knee but passed through without causing any significant damage.

Prior to the shooting, Robinson earned the starting running back job.

Brian Robinson Jr. of the Washington Commanders catches a pass against the Carolina Panthers during a preseason game at FedEx Field on Aug. 13, 2022, in Landover, Maryland. (Scott Taetsch/Getty Images)

It remains unclear how much action Robinson will see during the Week 5 game. Throughout the first four games of the season, Washington has relied on the running back duo of J.D. McKissic and Antonio Gibson.

Gibson has been the team’s leading running back over the past two seasons.

Robison recently returned to the practice field and said he was happy to be around everyone again.

“It was beautiful. Just getting back on the field, having fun, being around my coaches and team again. Just a beautiful day,” Robinson told reporters after practice on Wednesday.

“He is progressing very well,” Rivera said. “Each week, he gets to see the doctors and the trainers. They felt now is a good time to see how he does outside. 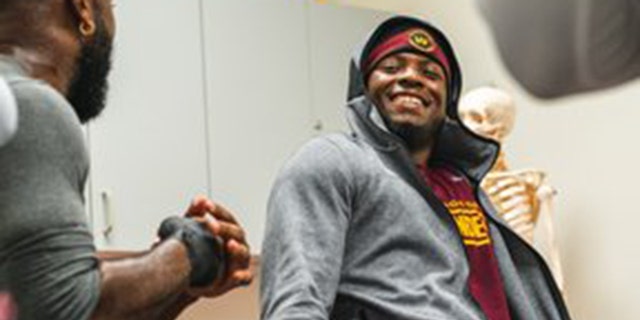 Robison was entering a restaurant in the Washington, D.C., area when he was shot. He underwent surgery on his right leg, but doctors said Robinson did not suffer any structural damage.

Shortly after the surgery, Robinson took to social media and wrote, “Surgery went well! Thanks for the prayers! God is great!” He was released the next day.

No arrests have been made in the shooting. 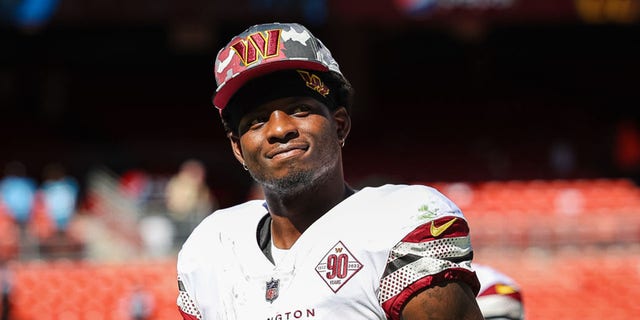 Brian Robinson Jr. of the Washington Commanders looks on during a preseason game against the Carolina Panthers at FedEx Field on Aug. 13, 2022, in Landover, Maryland. (Scott Taetsch/Getty Images)

Robinson Jr. played college football at Alabama. He won two national championships during his time with the Crimson Tide. The Commanders drafted him in the third round of the 2022 NFL draft.

The Commanders are set to play the Tennessee Titans this Sunday at FedEx Field.