“But even some Youngkin fans fear the strategy that helped him win the Executive Mansion — sending mixed messages on many issues, including elections, abortion and race — won’t stand up to the national spotlight,” she wrote.

Vozzella said Youngkin’s “contortions” are “perilous” to both his reputation and to democracy and pulled in both praise and criticism from Rep. Liz Cheney, R-Wyo.

“[Cheney] praised Youngkin over the weekend for ‘doing a good job’ as governor and not buying into ‘the toxin of Donald Trump.’ But she blasted his support for Lake while ruminating on the dangers posed by election deniers and more mainstream figures willing to countenance their lies,” she wrote. 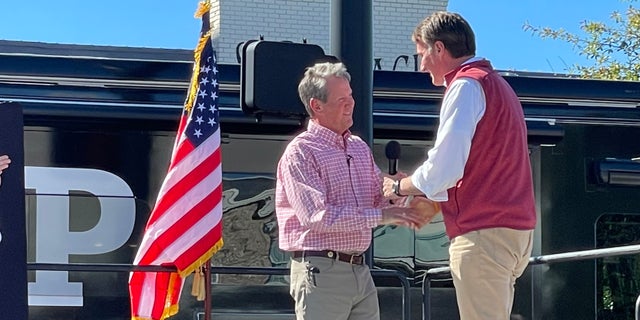 While Youngkin credits his support for “election-denying” Republicans to support for party affiliates regardless of differences of opinion, Vozzella argues the flip-flop is characteristic of “political acrobatics.”

“Although it’s not unusual for politicians to set aside certain policy differences as they stump for fellow Rs or Ds, Youngkin has demonstrated uncommon flexibility on an issue that for others, like Cheney, represents a bright line,” she wrote.

Cheney’s disenchantment for Youngkin’s “election-denier” support extends to other Republicans, however, including former Florida congressman David Jolly, R, who once supported Youngkin but now considers him “a mirror of the party, not a leader of the party.”

Vozzella also dug at Youngkin’s own alleged reluctance to voice whether Biden legitimately won the 2020 election, saying he only “conceded Biden’s legitimacy” after securing his nomination for the governorship.

Taylor Penley is a production assistant with Fox News.