White House National Security Adviser Jake Sullivan said Friday that he believes a war with China over Taiwan can be avoided even as tensions over the island remain high.

Tense relations with China peaked in August 2022 after then-Speaker of the House Nancy Pelosi visited the island to show solidarity with Taipei, despite threats from Beijing that the visit would prompt “very serious developments and consequences.”

China viewed the visit as “a gross interference in China’s internal affairs” and responded by immediately ramping up aggressive military drills near the island in the days after her trip, as well as in the months since.

White House National Security Adviser Jake Sullivan listens as he is asked a question during the daily briefing at the White House in Washington, Monday, Aug. 23, 2021. (AP Photo/Susan Walsh)

“There is a risk of conflict with respect to Taiwan, but I believe that with responsible stewardship, we can ensure that this contingency never comes to pass. And that is our responsibility,” Sullivan said in an interview with NPR.

The White House refused to condemn Pelosi’s visit and maintained that members of Congress are allowed to keep their own schedules.

However, Sullivan noted that preventing war with China will be “hard work” and said it will take “coordination with allies.”

“It will require us following through on the commitments of the Taiwan Relations Act, which for 40 years now has said we will provide defensive articles to Taiwan. Additionally, it will require direct diplomacy with the [People’s Republic of China],” he told the morning program. “We have to make this a priority to ensure there is not a war over the Taiwan Strait.”

China has repeatedly accused the U.S. of “playing with fire” and has claimed that routine naval drills performed under international “freedom of navigation” operations are a violation of Chinese sovereignty.

CHINA WARNS US NOT TO CROSS ‘RED LINE’ ON TAIWAN, USE ‘SALAMI TACTICS’

On Thursday, Beijing once again levied these accusations at the U.S. Navy after a guided missile destroyer passed through the Taiwan Strait in what the Navy described as routine activity.

“Chung-Hoon’s transit through the Taiwan Strait demonstrates the United States’ commitment to a free and open Indo-Pacific. The United States military flies, sails and operates anywhere international law allows,” the Navy said in a statement.

“U.S. warships frequently flex muscles in the name of exercising freedom of navigation. This is not about keeping the region free and open,” spokesman for China’s embassy in Washington Liu Pengyu said in a statement to Reuters. 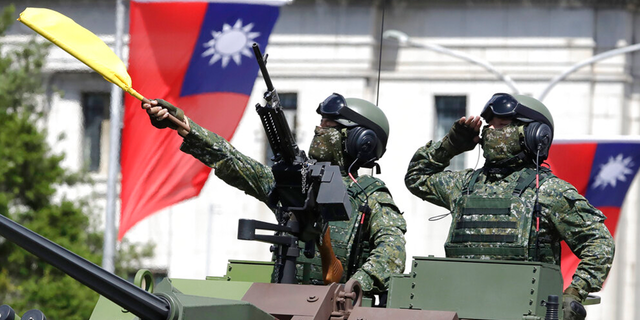 Taiwanese soldiers salute during National Day celebrations in front of the Presidential Building in Taipei, Taiwan. After sending a record number of military aircraft to harass Taiwan over China’s National Day holiday weekend, Beijing has toned down the sabre rattling but tensions remain high, with the rhetoric and reasoning behind the exercises unchanged (AP Photo/Chiang Ying-ying)

Liu called on the U.S. to “immediately stop provoking troubles, escalating tensions and undermining peace and stability across the Taiwan Strait.”

The U.S. Navy maintains it is allowed to operate in the Strait under international law and said it “is beyond the territorial sea of any coastal State.”