While thanking people during his speech at the White House Conference on Hunger, Nutrition, and Health, Biden looked out into the crowd and asked about the whereabouts of Rep. Jackie Walorski, R-Ind., who died in a car crash along with two staffers in August.

“Jackie, are you here? Where’s Jackie? I didn’t think she wa – she was going to be here,” He said, to the shock of everyone watching.

At the press briefing, reporters asked Jean-Pierre about the unusual moment and if Biden had mistakenly thought the congresswoman was still alive. She denied that Biden was looking for her out in the crowd and claimed he was speaking of the late congresswoman because she was “on his mind.”

MCENANY HITS BACK AT KARINE JEAN-PIERRE’S NON-ANSWER ON CRIME: THIS IS BIDEN’S ‘MYTHICAL AMERICA’

CNN senior White House correspondent Phil Mattingly sparred with Jean-Pierre over the gaffe. “I’m trying to get my head around the response. The late congresswoman was top of mind for the president and her family was expected to be here and that’s what he was thinking about? Why was he looking for her?” he asked.

Jean-Pierre refused to admit it was a mistake on Biden’s part. She insisted, “I think the American people who watch the briefing from time to time, maybe at this moment will understand when someone is at top of mind.”

CBS News Radio White House correspondent Steven Portnoy asked the press secretary to explain Biden’s “mistake,” asking, “Can you explain where the mistake was made? Did the President–was the president confused? Was something written in the teleprompter that he didn’t recognize? Can you just help us understand what happening?”

Jean-Pierre rebuffed Portnoy, accusing him of “jumping to conclusions.” 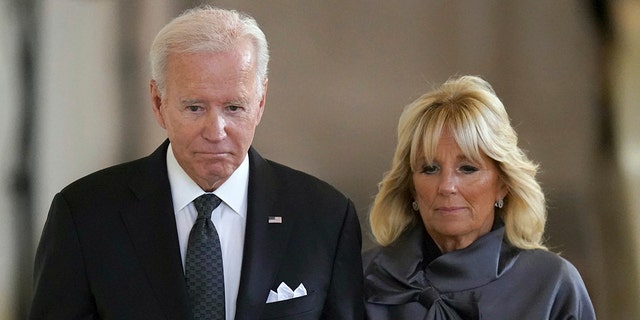 During a Wednesday speech, Biden looked into the crowd and asked, “Jackie, are you here? Where is Jackie? She must not be here,” though the congresswoman died more than a month ago.  (Jaob King/Pool Photo via AP)

Huffington Post White House correspondent S.V. Dáte tweeted about the incident from inside the White House press briefing room, writing, “Press sec Karine Jean-Pierre trying, and failing, to explain how Biden wondered aloud whether a congresswoman who died last month was in the audience today at his event.”

“The White House won’t concede that Biden misspoke when he asked if the recently deceased Rep. Walorski was in attendance today,” MSNBC contributor Sam Stein tweeted.

“That’s one way to explain away the fact that our president appears to have oatmeal for brains…” Townhall.com managing editor Spencer Brown tweeted.

TAMPA MAYOR GETS BIDEN PHONE CALL LIVE DURING PRESS CONFERENCE: ‘I GOT A CALL FROM THE PRESIDENT’

Daily Beast media reporter Justin Baragona asked, “You know how the press secretary could have avoided this shitshow? She could have just started the briefing by saying Biden misspoke and moved on. Instead, she’s just trying to dodge these questions while defending Biden and not conceding anything.”

Politico White House correspondent Christopher Cadelago claimed the Biden press people broke their word, tweeting, “Biden’s press team repeatedly made commitments — on their own, and from their earliest days of taking office — that they would always tell it like it is and not obfuscate or gaslight on issues large or small.” 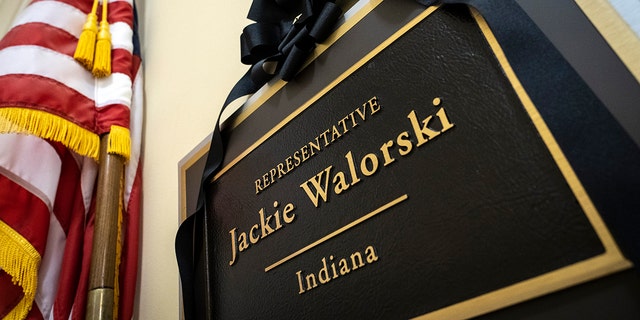 A black ribbon adorns the nameplate of the late Rep. Jackie Walorski (R-IN) at her office in the Cannon House Office Building on August 4, 2022 in Washington, DC. Walorski, 58, and two staff members were killed in a car crash in Elkhart County, Indiana. (Drew Angerer/Getty Images)

In all, Jean-Pierre fielded roughly 10 questions Wednesday about the president’s gaffe during the White House press briefing. Jean-Pierre told reporters 14 times that the president wasn’t confused about whether Walorski was alive and in the room, but he had her “top of mind” because he will be meeting with her family on Friday.