A dangerous winter storm moving across the country has disrupted holiday travel from the skies to the stations as cancelations and delays surge into Christmas weekend.

As of Friday morning, many airlines, the Amtrak train service and bus services were reporting changes and cancelations across the country because of severe weather conditions.

On Friday alone, more than 717 flights in, out of and across the U.S. have been delayed and over 2,981 have been canceled, according to a 5:20 a.m. ET report from flight-tracking website FlightAware.

Airports leading the way in cancelations were as follows: LaGuardia in New York (181), Detroit Metro in Michigan (157), and Seattle-Tacoma in Washington (155).

WINTER STORM MOVING ACROSS US RESULTS IN WARNINGS, COLD WEATHER ALERTS FOR MORE THAN 150 MILLION AMERICANS

Travelers wait in line to check-in for their flights at Terminal 1 ahead of the Christmas Holiday at MSP Airport in Bloomington, Minn., on Thursday, Dec. 22, 2022. (Kerem Yücel /Minnesota Public Radio via AP)

Amtrak, the nation’s largest passenger train service, announced Thursday afternoon more than 20 routes, mostly in the Midwest, were canceled through Sunday morning because of the winter weather. Some lines in the Midwest and Northeast are delayed for the same reason.

The company posted the following statement on its website along with the route cancelations and changes:

“Severe winter weather has caused Amtrak to make several service changes and cancelations from now through Sun., Dec. 25. These actions are taken in an abundance of caution and in consultation with state transportation departments, host railroads, emergency managers and weather forecasters.”

Amtrak said affected customers can call 1-800-USA-RAIL to change their reservation. The company added additional charges will be waived for reservations changed during the modified schedule period. 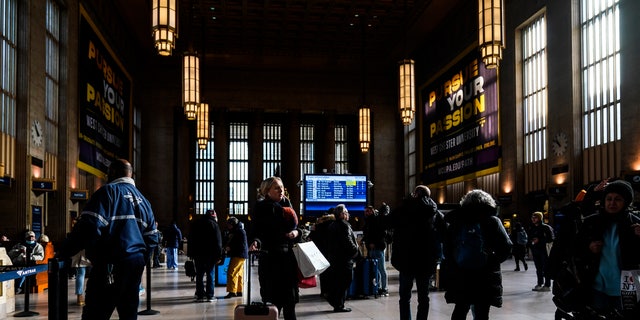 Bus services are also being affected by the weather. Greyhound issued an alert Thursday stating customers traveling to and from the Midwest over the next two days may experience delays or cancelations.